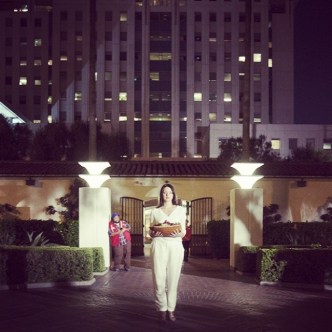 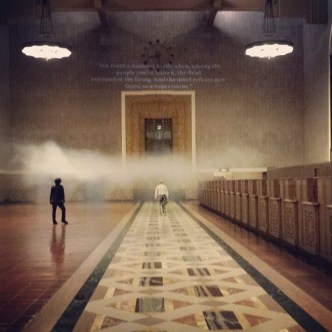 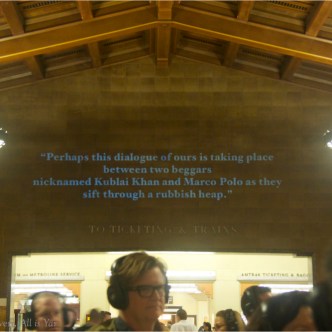 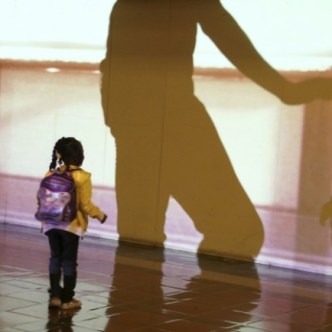 Passersby dances in the projection 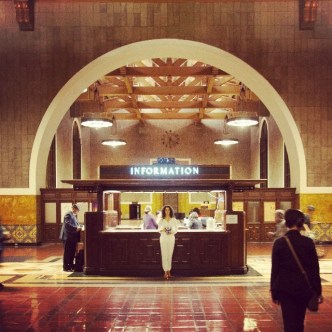 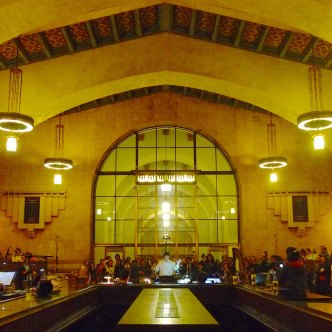 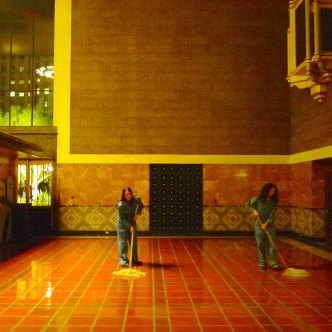 Invisible Cities: The Dematerialization of the Opera

Invisible Cities invited an audience to wander through an operating train station, searching for the singers and dancers or merely taking in the life of the station around them. The audience stayed connected to the live performers via wireless headphones. The orchestra in one building and the singers moving through the space were seamlessly connected in the ears of every spectator.

With this conceit, the world premiere of Christopher Cerrone’s opera became a major cultural event in Los Angeles and received prominent international attention. The score was a finalist for the 2014 Pulitzer Prize in Music, and the production was on the Best of lists for both Music and Architecture by the Los Angeles Times in 2013. The production is now looking to tour to train stations internationally.

With a glorious set (LA’s art deco masterpiece, Union Station) and thousands of performers (the commuters and passersby), my production concept aimed to be as immaterial as possible – certainly as invisible as opera can allow while remaining a live experience.

Of course, “invisible” work involves an enormous ingenuity of design. Jason H. Thompson’s video and projection design offered ingenious displacements of the real among the life of the station.

Supertitles appeared boldly on the walls of the station. Not only did this allow audiences to follow the text (in what might be our most straightforward nod to operatic convention!), but it allowed everyone in the station to engage with Calvino’s powerful poetry as they moved through the station. Jason also utilized a blank wall to offer a slow-motion “mirror” of passengers moving through the space. The transfigured sense of time this projection offered made the audience contemplate our “imprint” on the space – ultimately nothing more than a shadow, a projection, a fleeting memory. (And indeed, unsuspecting passengers took simple delight in their own shadows becoming part of the projection.) In this way, Jason did not illustrate the experience but enhanced it philosophically and aesthetically.

E.B. Brooks’ costumes were also crucial storytelling devices, creating subtle relationships across vast physical spaces and offered a sense of subtle transformation as the piece evolved. At first glance, the audience couldn’t distinguish performers from passersby. As the production went on, the singers’ costumes became more theatrical. In this way, theater existed all around the audience: everyone at the station was a potential performer. Only in the final scene did we see Kublai Khan in full regalia.

The Altered Reality of Headphones

The sound engineering of Sennheiser and Bexel Audio enabled this experience entirely, in part by offering the audience an estrangement that they are already familiar with on a daily basis. By detaching sound from image and confusing our sense of proximity, headphones offer us an altered view of reality every time we use them. Separate from the physical world, the music we are hearing opens up a private doorway somewhere else. And suddenly the external space around you has transformed for you alone: a train station is a radically different place for the woman catching her train listening to Dies irae than for the man listening to A Love Supreme. Any potential revelation or meaning they experience is no less truthful for being purely coincidental or different from their fellow commuter. With Invisible Cities, however, everyone with Sennheiser headphones was listening to the same thing – and in this way, a subtle, silent community was forged among the unsuspecting commuters.

Opera is exciting only when the eye listens and the ear sees—that is, when the collision and confusion of your senses ignites your imagination. Headphones offer us this experience every time we use them.

The entirety of the concept would be meaningless if it did not resonate so powerfully with the Calvino text and Christopher Cerrone’s sensitive setting of it. In the novel, Kublai Khan hears stories of the cities in his empire by Marco Polo—but the stories depict impossible cities, fantastical visions. The reader is offered brief descriptions of an invented city built on spiral seashells; or an unseen town built on long, thin stilts that stretch into the clouds; or the realm where the loved ones we lost are reborn but doomed not to recognize us. Calvino’s cities reflect the architecture of the reader’s own mind and heart. The imaginary travelogue is framed by a series of dialogues between the Mongol emperor and the Italian merchant, which Calvino depicts as philosophical and often cryptic musings on semiotics, the shortcomings of language, and a mistrust of external reality. The result is a book of limitless forking paths, concise like ancient wisdom but contemporary in its view of the world.

Chris’s deeply felt treatment of the novel aspired to capture the book’s very evanescence. Chris does not try and graft a traditional operatic structure onto the novel; instead, a serpentine musical structure became the drama of the piece. Chris employs resonance and sonic decay as a poetic realization of the book’s atmosphere. He prioritizes experience over narrative, and evocation over illustration.

The haunting beauty of Chris’s writing depends on an intimacy beyond what theaters can achieve; in Chris’s setting, you want Kublai Khan and Marco Polo to be whispering in your ear. The detachment of sound from image offers a great solution to the problem of representing the cities—like the book,

the cities can truly live in the audience’s individual imagination. And you could hardly select a location more philosophically appropriate for the piece than a train station—especially Union Station.

Confusion of Internal and External Spaces

In relation to the Quadrennial’s theme of Weather, Invisible Cities took advantage of one of the glories of Los Angeles life: the city’s temperate weather. Even though the performances were in October and November, the audience was invited to move fluidly and comfortably between the train station’s interior and garden spaces. The immense freedom this gave the audience was an important aspect to the piece’s success; the traversal of thresholds separating internal realities and natural spaces was an important resonance with the original themes of Calvino, where the lush garden of Kublai Khan initiates an investigation to the very nature of reality.

More metaphorically, the Quadrennial director’s statement that weather “doesn’t discriminate, and crosses all economic, ethnic, and social lines” resonates with another powerful aspect of the performance. Union Station is unique in Los Angeles for offering a “town square,” where all walks of life gather. Homeless people, businessmen, politicians, and tourists all mingle peacefully and equally; in fact, the beautiful leather chairs in the waiting room feel like thrones, making each individual there royalty. Invisible Cities invited the audience to survey that landscape, which was sometimes challenging and sometimes beautiful. Again, this connects with Calvino’s unforgettable text, which Chris set in the epilogue: “Seek and find who and what, in the midst of the inferno, are not inferno. Make them endure, give them space.”